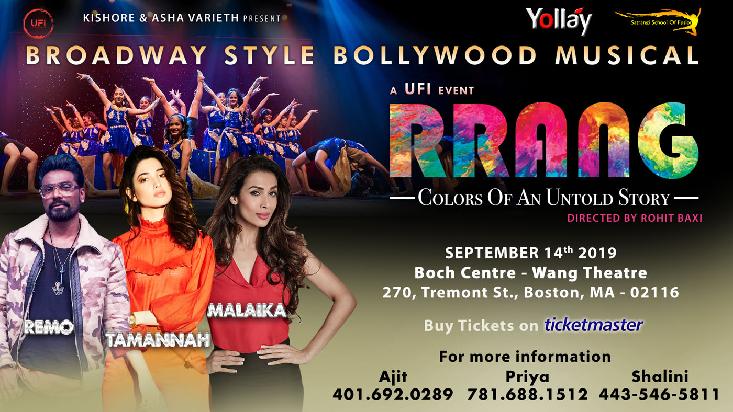 Yollay is excited to partner with UFI Events to bring to Boston, a never before seen large scale spectacular production, "RRANG- BROADWAY STYLE BOLLYWOOD MUSICAL" that brings to life the grandeur and extravaganza of Bollywood dance and music. Bollywood A-listers, Malaika Arora, Tamannaah Bhatia and choreographer, dancer and film director Remo D'Souza will be performing along with an amazing crew of 150 trained dancers, over 2000 costumes and special lighting. The synergy on stage is amazing, colorful and a must see for every dance, music and theatre enthusiast.

This Bollywood theatrical production is unique and is being hosted at the prestigious BOCH CENTER WANG THEATRE which is one of the five largest stages in the US.

"RRang - Colors of an Untold Story" is a unique story that combines dance, theatre and music with a story to be told. It is a large scale production that brings in mysticism, vibrancy and the magic of old and new India. It is an amazing mix of Diversity, Culture and Ethnicity. It will weave tradition with modernity, light with dark, ancient India with modern India. Colorful costumes and elaborate sets create unforgettable night of explosion and energy.

Malaika Arora, Tamannaah Bhatia, and Remo D’Souza will be performing at this remarkable production with over 150 dancers from Satrangi School of Fusion, 2,000 costumes, and special lighting effects that bring the magic of Bollywood in a live performance. Listed below are the details of the performers. RRANG was brought to inception by the visionary mind of Rohit Baxi, the trailblazing director, and choreographer.

Who will you see?

Malaika Arora:
90's kids out there! it is a golden opportunity to meet the "Chaiyya Chaiyya" fame Malaika Arora. Malaika Arora is an Indian actress, dancer, model, VJ, and television presenter. She is most famous for her dancing in the songs Gur Naalo Ishq Mitha (1998), Maahi Ve (2002), Kaal Dhamaal (2005) and Munni Badnaam Hui (2010).

Tamannaah Bhatia:
Who can forget the charming Tamannaah Bhatia? She started in 2005 with the Bollywood film - 'Chand Sa Roshan Chehra' , In the same year she made her debut in the South Indian Film Industry with the movie - 'Sri'. The recent ones are Siruthai (2011), Racha (2012), Cameraman Ganga Tho Rambabu (2012) and Thadaka (2013).

Remo D'Souza:
Remo D'Souza is an award winning Indian dancer, choreographer, actor and film director. D'Souza was a judge in the show Dance India Dance (DID). He made India's first 3D dance movie, ABCD - AnyBody Can Dance, with contestants from season 1 and season 2 of Dance India Dance.